The Death of Chronological Order

Years and years ago, back when I was actively using Facebook they made a change in which stories on your homepage were no longer in chronological order. Facebook's system changed and started ordering stories in a way they thought you would want to see. This would be posts you commented on or viewed the photos attached. The idea behind being that you would spend more time on the site if you saw content you liked vs endless scrolling through content you didn't enjoy.

The longer time you spend on Facebook, the more ads you see which means the more money Facebook earns. If a system is determining what you see now, are you missing out on any content? I can't answer that as I simply don't know. 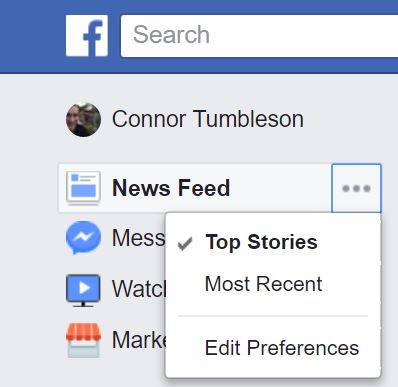 Perhaps I'm the minority, but I don't want a system feeding me what it thinks I want. I want to scroll a feed until I recognize the content I've already seen. This ensures I don't miss anything.

However, Facebook does not make this easy. After selecting "Most Recent", my feed now shows:

After one refresh, the default order is back to "Top Stories". Who knows how far into the settings I have to dig to make this setting permanent. What is clear though is that Facebook does not want me to use a chronological order.

Next up is Twitter, a great idea founded on the idea of chronological small tweets. In the past few years, Twitter has slowly been crippling the 3rd party applications that built them up. Probably a large exaggeration, but more and more the default Twitter website and application will work while other 3rd party services break.

Yes, I blocked out the tweet because that isn't important. The important part to note is that my Twitter feed has decided what I should see. Scrolling below these few tweets "stickied" tweets shows a tweet 28 minutes ago. So these tweets for some reason Twitter decided I should see instead of my chronological feed.

I can't find an option to disable this. I want a chronological feed, but once again I see why Twitter did this. Imagine I sit refreshing my feed every minute. The tweets may be the same and thus I will leave the site. If Twitter wants to keep me on the site they need to feed me new content. They can find content they think I'll be interested in regardless if its new or old and show it to me.

Sites across the social networking space are experimenting or have implemented these algorithm based feeds. Right now under the microscope for changes is YouTube. Some users begin noticing a few irregularities with the order subscribed videos were showing.

Just to clarify. We are currently experimenting with how to show content in the subs feed. We find that some viewers are able to more easily find the videos they want to watch when we order the subs feed in a personalized order vs always showing most recent video first.

Like Facebook and Twitter, I fear for the day that algorithms decide what content I should see and watch. I've embraced algorithms for finding new music, but solely because I can't listen to the same song for a month. Hopefully my intake of social networks and videos won't be controlled by machines.