This time I received an email from someone who had an Ingress version labeled 1.50.0. I checked the validity (to make sure it was a valid Niantic build) and it came out correct. So lets dig in into this new version.

We first learned on this video, that levels 9-16 would be arriving. It seems I missed this bit of detail, as this exact information arrived in the APK during 1.47.0. We could of broke the news before Niantic :p

The new max XM was added in 1.50.0, while the medals required was added in 1.48.0. This shows active development in what the "new" levels will bring or require. Who knows if this will change on the next released version.

Reddit user u/numinit first hinted at these new levels here.  Which I can confirm after decoding PlayerLevelKnobBundle 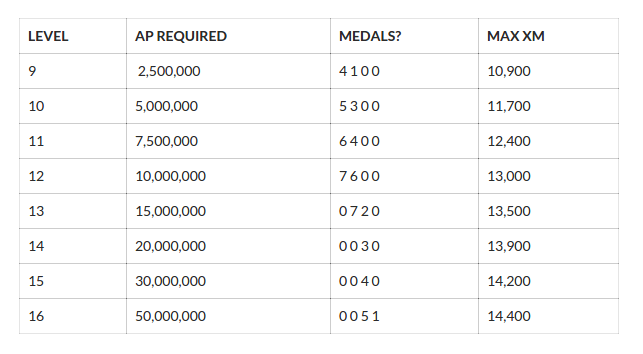 The medal column is difficult to explain. It calls another file, (obfuscated as LevelAttainmentTrigger.a), which takes those 4 numbers as parameters.

We can decode the Enum it calls, which is below.

However, the parameters passed to the file is only 4 numbers, (there are 5 levels of medals). My research shows that "Bronze" medals are ignored. I expect this because during obfuscation, the statements skip the letter a and use (b,c,d,e) instead. This leads me to believe since a is assigned to "Bronze". That Bronze medals play no part in the leveling-up scheme.

So Level 9 requires 2.5 million AP, 4 silvers and 1 gold medal. It in return gives you a max of 10,900 XM. Using this knowledge you can look at the above tables to see future levels requirements.

This one has got me beat. I have no clue what it is for, but it must be for something.

EDIT: All the "hits" for overdrive occur in Player Profile. So probably nothing interesting. The naming of the class name tricked me :(

Thanks to the comment from "emsy". I read my diff backwards. This was removed. Not added :)

This version was built on "April 16 - 2:57". So this version is not a "bugfix" for the on-going Capsule bug.  (Unless that bug was known at the time). However, seeing how I don't have a Capsule, I cannot confirm if it is patched.

Otherwise looks like small bug-fixes and paving the way for new levels.

How to prepare for an Ingress Anomaly