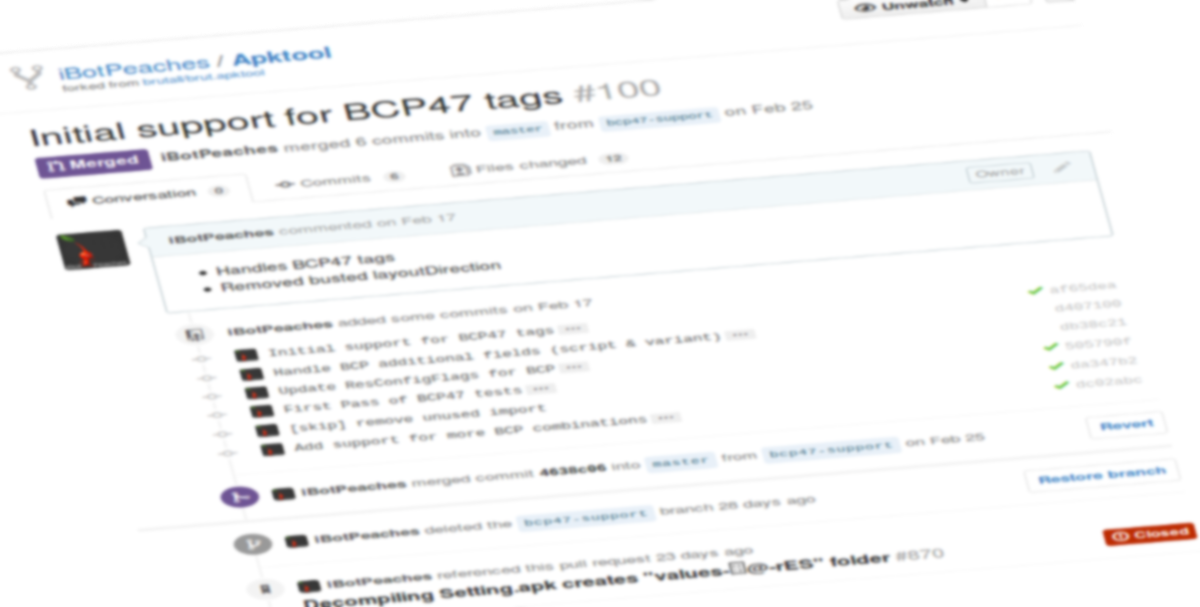 This is my second technical blog exploring the steps taken to add support for BCP47 to Apktool.

The February 16th daily of Cyanogenmod had an interesting error. The decode went alright, but spat out a common directory error on rebuild.

These "invalid resource directory name" errors are thrown by aapt. You can see in tools/aapt/AaptAssets.cpp in slurpResourceTree().

So apktool produced a qualifier that aapt rejected. Obviously looking at the folder of values-?@-rES. There is something wrong there. (?@) is not a qualifier, so something went amiss. Thankfully with qualifier errors we can leverage aapt to identify the qualifiers that were suppose to be there.

My first step was to figured out what ast was. ES is Spain, but I had never seen a 3 letter language before. Since Cyanogenmod utilizes CrowdIn. I went to their page and checked out all languages beginning with an A.

There it was, plain as day. Asturian was added to Cyanogenmod, yet it had a 3 letter qualifier when every other language had 2. My Cyanogenmod device handled these apks fine, but apktool failed. Somehow I missed a qualifier change during the Lollipop update.

I usually visit the ResourceTypes page to find changes to qualifiers. As of this blog post (4/10/2015) there is no mention of what we will soon figure out to be the addition of the BCP47 qualifier and a clever 3 letter packed byte trick.

The commit message for the first commit, answered the question.

This is what we wanted.

So lets work through this with ast trying to replicate the byte combination used. Using an ASCII table.

Already I spot a problem. If you aren't familiar with binary each digit in binary represents a power. The below picture should explain it better than I can.

However that is 8 bits. As mentioned above, we only have 5 bits to represent these characters.

This changes our image to this.

Examining the commit that introduced this change I find the packLanguageOrRegion method which appears to handle the character to byte conversion.

It seems AOSP subtracts some char base from the bytes before bit shifting them into position. So I figured out what calls this method.

Each of these digits can be packed into 5 bits.

So at least we know and understand how 3 letters are fitting into 2 bytes. This base value is substracted from the characters and then added on later so they can fit in 5 bits. Quite an interesting method.

So lets get started on working on a patch. It appears the decoding for language and region has been changed to this unpackLanguageOrRegion function instead of just reading the chars directly from the stream.

Below the c++ version.

So a fairly easy port to java.

At this point we correctly had char[]'s that represented 3 character languages. However, we didn't have the correct locales being printed. A bit of hackery checking the length of language and region allowed an adaption to getLocaleString(). This was able to handle the 3 letter packed language.

I then decoded the original apk and checked the /res folder.

Though I knew my work was not yet finished, because I spied a qualifier change while looking at the previous commits.

Hiding without Android documentation in the ResourceTypes.h file was this addition.

This was the first mention of BCP-47 I saw. This stands for Best Current Practice. Though researching BCP-47 in the scope of Android was very difficult.

Documentation was next to none and my only hits were from the AOSP commits, bug tracker and unit tests. It appears they wanted to "soft" launch this change as I cannot find any proof of its existence in any Android developer documentation. The unit tests proved to be exactly what I needed.

This showed qualifiers such as

It appears the pattern of -b+ signals a BCP tag. So basically if script or variant was not equal to null than I knew it was a BCP tag. Which was an easy addition to our ARSCDecoder.java and ConfigFlags.java.

size corresponds to the size of the header. Prior to this change it was 36. 36 + 12 = 48. This helps Apktool from breaking on older apks by only reading data if it is there.

Quite a complicated pattern of language, region, script and variant. Since after you had the variables populated, in what order did the locales can get written? Was it script before variant or vice versa? There were a couple edge cases to handle, which made this a boring fix. No documentation. Just trying to replicate the unit-tests in AOSP and making sure Apktool could handle those.

Once applications start utilizing this unknown BCP-47 feature, a bug or two might be discovered. Until there is some real world results, I'm not quite sure if I handled support for every combination of language, region, script and variants.

Though, the main concern is that the 3 letter language had been fixed and merged into master.