Growing up I always wanted to be the best at something. At first it was simple things like winning the random kick ball games in elementary school or winning the Pokemon battles I had when friends and I linked Game Boy's together.

This was such a small scale that I craved bigger things. Premier soccer and the start of middle school track filled that craving. However, these were team oriented sports so it was unfair to label anyone as the "best" as you win/lose as a team.

Middle school track was an interesting time. I ran the long distance events (mile, 800m and 400m). Among our school, I always got second in the mile. I couldn't beat this great friend who consistently ran faster and better than me. It was simply defeating to be so close to that number one spot in a race, yet not obtain it.

Track meet placing swayed depending on the school's competing, but I usually placed in the top five. The top spots weren't just steps away though, those finishing ahead of me were far ahead.

High school came around and school's merged. I had another chance to strive to be the best in something I did, mainly because my middle school friend went to a different school.

Summer training was optional, as High school couldn't enforce sponsored meet ups for training. This training was at 6am daily and I attended every one throughout the summer.

I thought with the amount of training I could compete for the #1 spot, however it was not. Track meets left me in the top 10 as meets involved a lot more schools and there were always people faster and stronger than myself.

There were two thoughts in my head. The first was that these kid's chemistry just naturally gave them an edge as some were simply born as a runners. My other thought was that they trained more and thus deserved it. 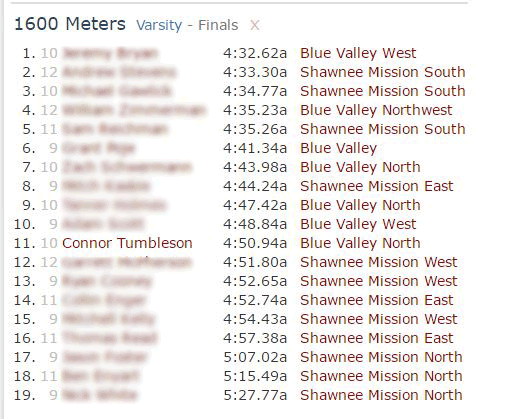 Finding old track records was tough and I only found the state meetup from the end of my Sophomore (10th grade) year. Times got quicker as I grew, but the placement stayed around the same.

Once again the top spot eluded me. Though, the nights I stayed out with friends or went to the pool, I could have been training. It appeared my life had to be dedicated to the task at hand in order to hit the top spot.

College came around and any school sponsored sport was abandoned. My only activities were soccer leagues outside of school and thus less competitive.

Competitive video games though was really starting to boom. The Major League Gaming (MLG) community was growing and it was always an interest to play at that level.

I realized pretty quickly the MLG was not for me. For some games I could place in the top 1% of players and I thought that was good. However, take the total players of one game at 400,000 people. 1% of that population is 4,000 players. At MLG events there are roughly 40 players (8 teams of 4, with a coach per team).

It simply is insane and I commend anyone at that level.

However, I was not giving up yet. I tried my luck in a video game that is coming up on being 2 years old, dedicating 8 weekends of playtime. Besides eating horrible food and not taking care of my body physically with workouts on the weekend days that I played. I partially completed my goal.

For those unaware of ELO, Wikipedia says.

The Elo rating system is a method for calculating the relative skill levels of players in competitor-versus-competitor games.

The flat line above is when I took a break midway through this experiment. I relaxed from May 9 to May 28 and played on the 3 weekends following that.

I played my ass off a video game towards the end, averaging 180 games each weekend for 3 weekends straight. This was roughly 3.75 days of playtime over 6 days, which is nothing I'll subject my body to again.

Starting my experiment I was in 117,601 place out of 247,673 players (Starting point at 1200 ELO). Unlike my previous track and soccer sports, video games had instant global results and I could watch my progress on the leader board live.

This was both sweet and upsetting as any defeat immediately resulted in a huge dip of progress that would take precious time to re-earn.

I peaked at 512th place during this experiment, which was the top .21% of players. 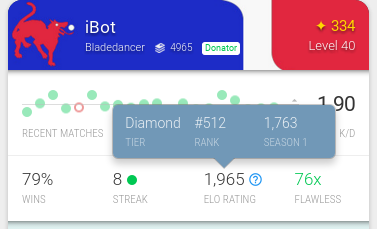 I then lost a few games and dropped down to 700th place. The time to get back to my previous high point was too much effort so I ended the experiment.

At first when I started this experiment. The top 5k players seemed like a goal, then it became top 1000, then top 500 where I failed.

I played against the #1 and #33 guy on this journey and was met with a skill and talent on a video game that was simply unmatchable. Without the nitty gritty nerd details, these players did not miss a shot and moved in ways that I didn't know was possible.

Though, I reflected back and successfully almost made it to the top 500 players. Simply not playing for hours brought my placement to 800th place as people are always playing even when I'm not.

The competitive nature inside of me will never end, but becoming the best will have to wait.