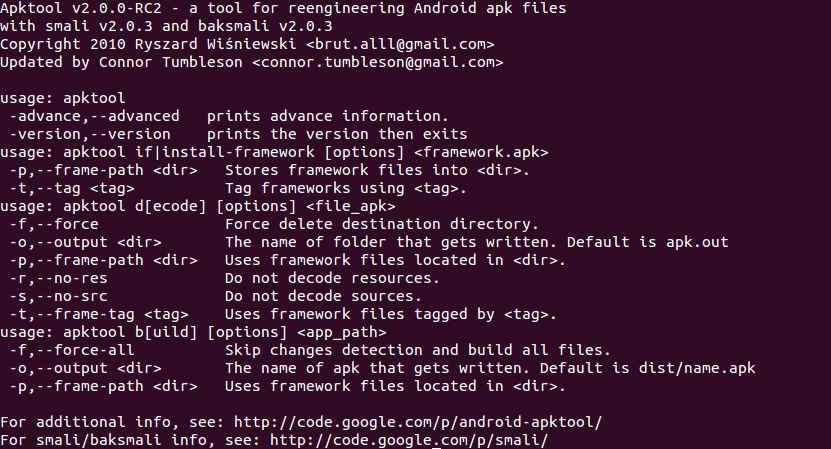 Apktool 2.0.0 RC2 has been released with tons of fixes and slight codebase cleanup. We have chosen to embrace Java 7 as our required version. First reason is that AOSP now requires it for the lastest Android.

The master branch of Android in the Android Open Source Project (AOSP) requires Java 7. On Ubuntu, use OpenJDK.

Secondly, Java7 was released on July 28, 2011. If we aren't requiring it 3 years later, then we might as well never update Java. Finally, the added benefits of try-with-resources and nio.2 really helped clean up the codebase. With all these reasons 2.0 now requires Java 7.

The issue tracker with issues tagged as v2.0 in the milestone category are on the list to be fixed before the official 2.0.0 gold release. While RC2 isn't gold, it has the stability you would expect from an official release. It just lacks the completed list of bug I want in 2.0.0.

I'm also cross posting this release onto XDA-Developers in order to broaden the users who test. Mainly to test cross platform use with the new embedded aapt executable. Since asking users to control the aapt binary caused about 60% of the problems/bugs. 2.0 resolves this by bundling the aapt binary.

Q: - Where is Apktool RC1?
A: - I made the release, but never blogged / posted about it. Not really sure what happened there.

Q: - How come Bug #526 & #534 are not fixed yet?
A: - Some bugs take me days of research before I even can attempt to code a solution. These two bugs I haven't even found a good solution yet.

Q: - Why are releases so slow?
A: - Apktool is open source. You are free to submit pull requests.

Q: - Why Bitbucket downloads?
A: - Free + download counter = perfect. Github and GoogleCode no longer have download functionality which leaves Bitbucket.