Continuing my blog posts related to nuclear events, this week we take a look into Lake Chagan in Kazakhstan. The reason for this lake was a test done by the Soviet Union (Modern day Russia) in 1965. This was one of many tests classified under the PNE category, which stood for Peaceful Nuclear Explosions. The idea being that you could adapt landscape to create bodies of water without the absurd equivalent of TNT needed.

These tests were following after the United States had begun Operation Plowshare. The majority of those tests happened at the Nevada test site in which nuclear explosions were used to test excavating shafts or creating craters.

So the USSR set out to test these explosions itself, codenamed the "Chagan" test. It was the largest of any PNE explosion done clocking in at 140 kilotons of TNT. For those curious, there is actually a video of the explosion and test available.

The reason this explosion is wildly known is that a small portion of the blast went upward, thus into the atmosphere. This violated the Limited Test Ban Treaty, which basically prevented nuclear explosions in the atmosphere, under water or in outer space. After the complaints were resolved from the United States and Japan, the Soviets never tested another explosion near the size of the Chagan.

After the Soviet Union collapsed the area around the test site returned to nature and the locals. Knowing the right locals can get you a tour right up to the lake or even in it. VICE has shown this is possible with the following video:

There is no fancy radiation suits required, just some strong shoes with a drink of antler blood and vodka. Both work in unique ways to prevent the absorption of radioactive elements.

The Polygon was the name of the nuclear test site the Soviet Union used, it was located in the KSSSR (Kazakh Soviet Socialist Republic), which is modern day Kazakhstan. Most of the tests and experiments at the Polygon cared little for the environment or local people. This led to mutations and destruction of the local area, which was largely unknown by global entities until the test site closed in 1991.

For nearly a decade, starting in 1996, many countries worked together in secret to secure the nuclear waste in the mountains. As of today, if you have the money and time you can actually visit the Polygon (Semipalatinsk Test Site) on a tour.

Watching multiple videos about this lake, they all begin with a walk among a decayed bridge. 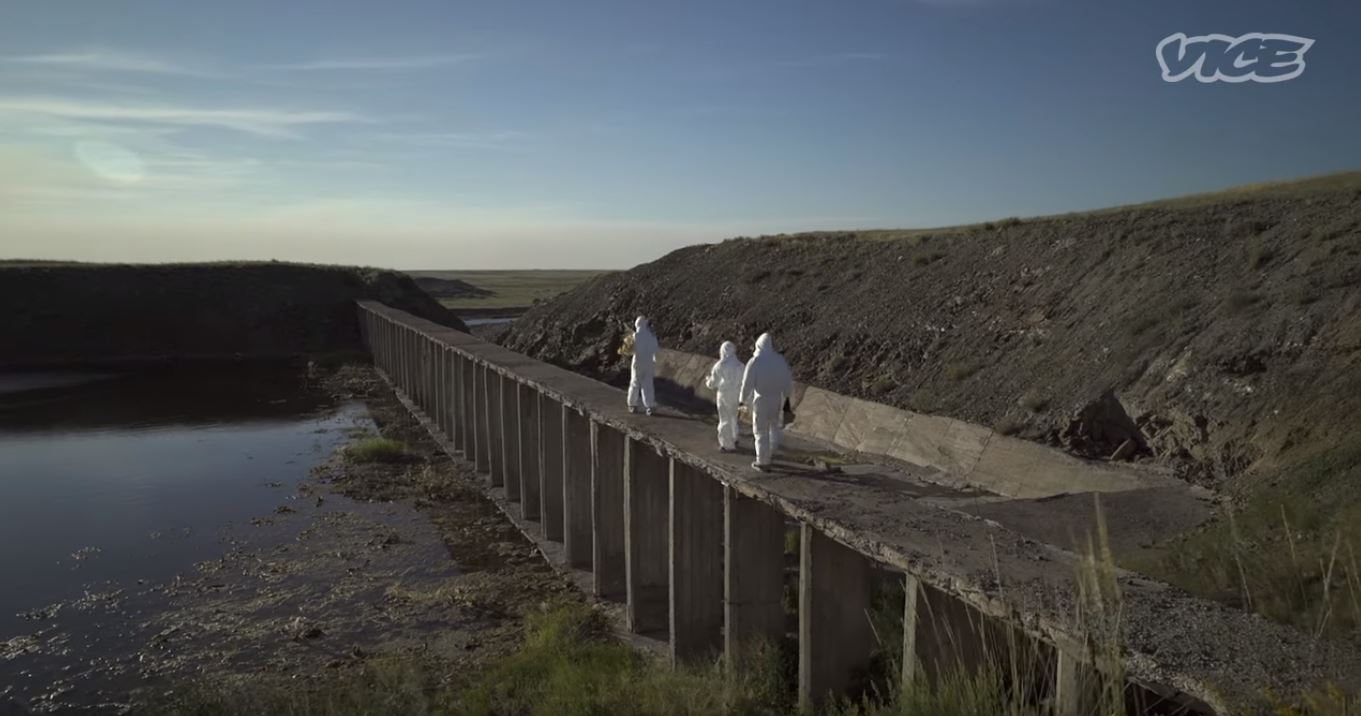 Credit: Vice Inside One of the Most Radioactive Places on Earth: Russian Road Trip (Part 3/3)

Which help set the scene before the large crater and pond on the other side. Nuclear research continues to amaze me, despite being nearly over 50 years old.