I am a console gamer in my free time, a bit of gaming daily helps balance my brain with all the programming and school work I do. My game of choice is Destiny on the Xbox One, and lately Destiny had been filled with those who abused networking bringing intentional lag to games to have an advantage over others.

Bans for network manipulation are being issued in the Crucible. More details tomorrow in the Weekly Update.

So this tweet above was very exciting for me to hear, as about 1 in every 10 games has some sort of network abuser making the experience quite poor. So tomorrow arrived and we got these bit of details in the weekly update.

We’re committed to protecting Destiny against cheaters. Enjoy your game. Just play it fair. That’s all we ask. Short of your own commitment to honor, we’ll taken action ourselves. It’s not a thing we enjoy doing – and certainly something we’ll never quantify or describe in agonizing detail. The damned shall remain anonymous – their nefarious actions a mystery.

We know you want justice. We’ve seen the chatter. We’ve read the reports. Yesterday and today, our Security Response Team has restricted access to the Crucible by the worst offenders among us all.

We started with a look at the most notorious cheaters that had been reported by other players. After a cross-reference against our own player-data, we gave the Banhammer a mighty swing. Contained in its blast radius were hundreds of people who have manipulated network traffic. If you don’t know what that means, we love you. Never change.

Cheating will not be tolerated, Guardians. The Destiny Community is a part of this process. Your finest weapons in the fight against cheaters are the reporting tools built right into the game. Submit a report when and where you detect shenanigans. Shaming your offenders in a video might feel good, but it doesn’t factor into our process for passing down a guilty verdict – and it might get you in trouble with the moderators of your favorite Guardian clubhouse! Issue a report. We’re watching and monitoring.

Now get out there and seek out a fair fight, assuming you still have the privilege to do so.

I think you know where this is going. I jump on my xbox to enjoy a lag free experience and am joined with this message. 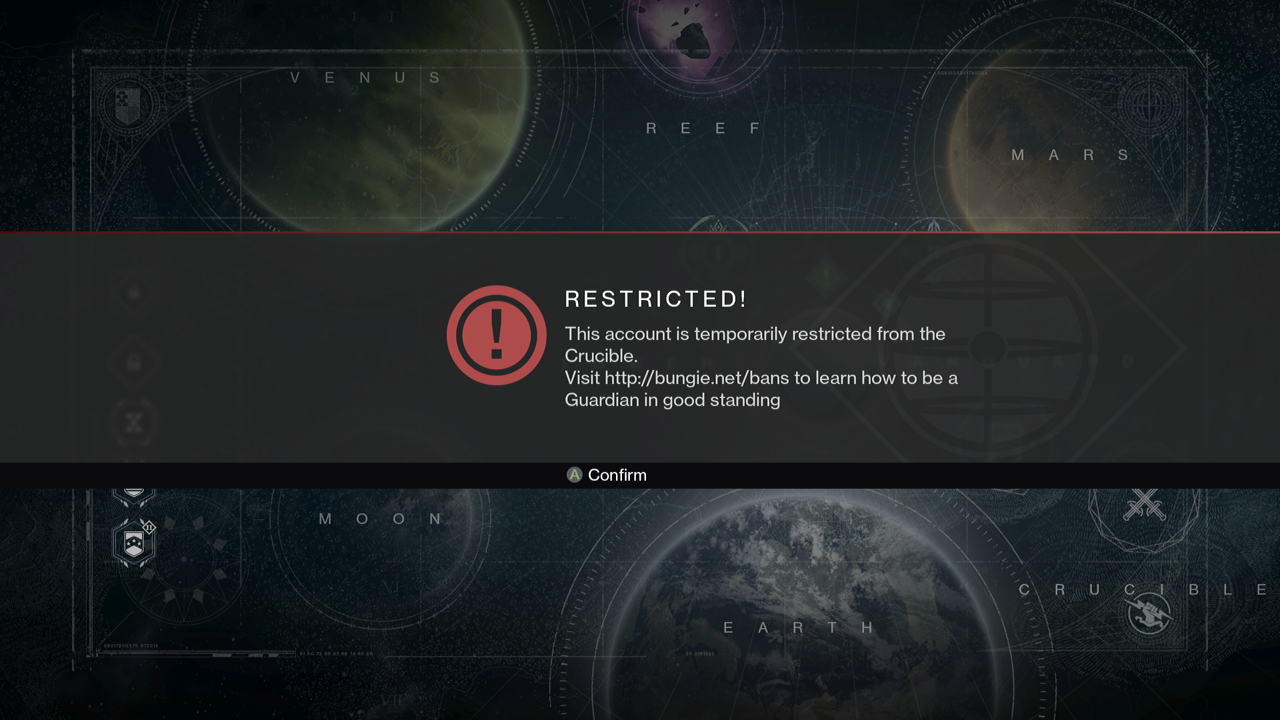 I simply don't believe the message shown to me. I restart my xbox and try again. Same message. I have been "Temporarily Restricted" and I have no idea why. So off to bungie.net/bans we go.

Q: An in-game message says that my account has been restricted or banned. What does that mean?

If you were directed to this page by an in-game message your account will no longer be able to play Destiny or portions thereof.

If the message you received referenced a temporary account restriction, your account status will eventually be restored.

I'm not going to copy and paste the ban page, but will cover a couple of main points.

Q: Where do I go to dispute the status of my Destiny account? How do I get a restriction overturned?

Account restrictions are temporary, but will not be overturned or undone before they expire. If actions were taken against your account, then it was with reason.

There are no options to dispute or overturn account restrictions or bans. There will be no responses to any communication from this process.

So that's just peachy. There is no dispute process or reason for why I'm banned or how long.

I'm part of a clan of amazing people, which is the only reason I still play this game. I load up our team website roster page and check everyone. For some strange reason, only I was banned out of 9 others who all, like me, play completely fair.

I only play with my clan, so I'm quite stunned how I caught a ban solo among our group.

So now I want to get this overturned, because obviously I did not engage in any cheating of any kind. Bungie has no phone number, no email support and no route to dispute (like mentioned above).

So I made my first mistake. Posting on the Help Forums on Bungie.net. I posted a short topic linking to my game history on various stat sites showing my innocence. I was met immediately with an army of replies.

Hi! Im here to collect the tears of cheaters for the new bungie bounty! Make sure they're extra salty!

I'm collecting a lot of mutes today. Thank you for making yourself known.

The last laughs on u scrub lol

Then you were with someone who was... and guilty by association... LOVE IT!

Then a few more rational comments

No evidence I can find that you cheated. Sympathies dude. You play with a range of other people though, perhaps one of your teammates lag switched and now you're caught in the ban-hammer blast radius.

Although he did not kick people from any games, that does not eliminate all possibility of cheating. I played against people who were clearly lag switching and never got kicked. The player would be at the other end of the map and suddenly the two orbs we were camping would be revived and he would not have moved. I am not saying OP did this, but just wanted to remind everyone that cheating isn't just limited to kicking.

Then finally an official response

All the details you need can be found at their official policy here.

So that's absolutely great. Lets go over these comments.

First, we have a subset of users that for some reason enjoy reading the Help forums on Bungie and interjecting opinions that help no one at hand here. Just spitting nonsense and laughing at the suspension of myself. I'm not quite sure why they get entertainment or fun from this, but it is apparent in all the other threads so they must like doing it.

Second, we have a few rational replies. Brave people who ignore the previous comments and examine my game history and find nothing amiss. Unfortunately they do not work for Bungie and personally can't help my cause. However, the responses are greatly appreciated as it drowns out some of the negative behavior.

Finally, we have the official reply. Which as you see, just tells me to go back to the ban page that http://bungie.net/bans links to. So here I am, banned from a game for something I didn't do without an appeal option.

After a few hours of ignoring the internet. A new Bungie tweet comes out, because the Help forums are littered with hundreds of topics saying the same thing I was.

.@TheLegendBlue That's not true. This week's restrictions are temporary and isolated to Crucible activity. Never too late to fight fair.

Which is what I already know. I'm temporarily banned for an unknown amount of time. So a bit upset, I take a visit to the Help forums -- my second mistake.

This Help forum in general has a new post every few seconds, with the same general topic being. "I'm banned, but dunno why". I personally refuse to believe that every banned person is innocent, because you can find proof online of users buying equipment with the intent to cheat and asking how it works with the same username that they are using on Bungie.

However, since I'm innocent I can't truly determine if anyone else is lying or not. I don't know them, much like they don't know me. However, they are belittled much like me by an army of users just spamming mean comments to people they don't know. Sounds like the internet right?

So off to the EULA I go, hoping to find something that gives me grounds to appeal / obtain a reason for a suspension, but instead I find this.

Bungie reserves the right, in its sole discretion, to terminate your access to any or all Bungie Services and the related services or any portion thereof at any time, without notice.

Well this sucks. So here I sit, a mere 35 hours after being suspended for an unknown amount of time for something I didn't do.

What really upsets me, is I'm not a random user of Bungie. I'm part of the development community group, which started before the game launched, obtaining API keys and access to the Bungie API. I even wrote a site powered by the Bungie API, you can read my blog about that here. I've exchanged multiple messages with the API team and helped track down fields that weren't properly calculated or displayed.

Yet, I'm temporarily suspended and sit here looking at this screen (Everything locked and prohibited from doing). 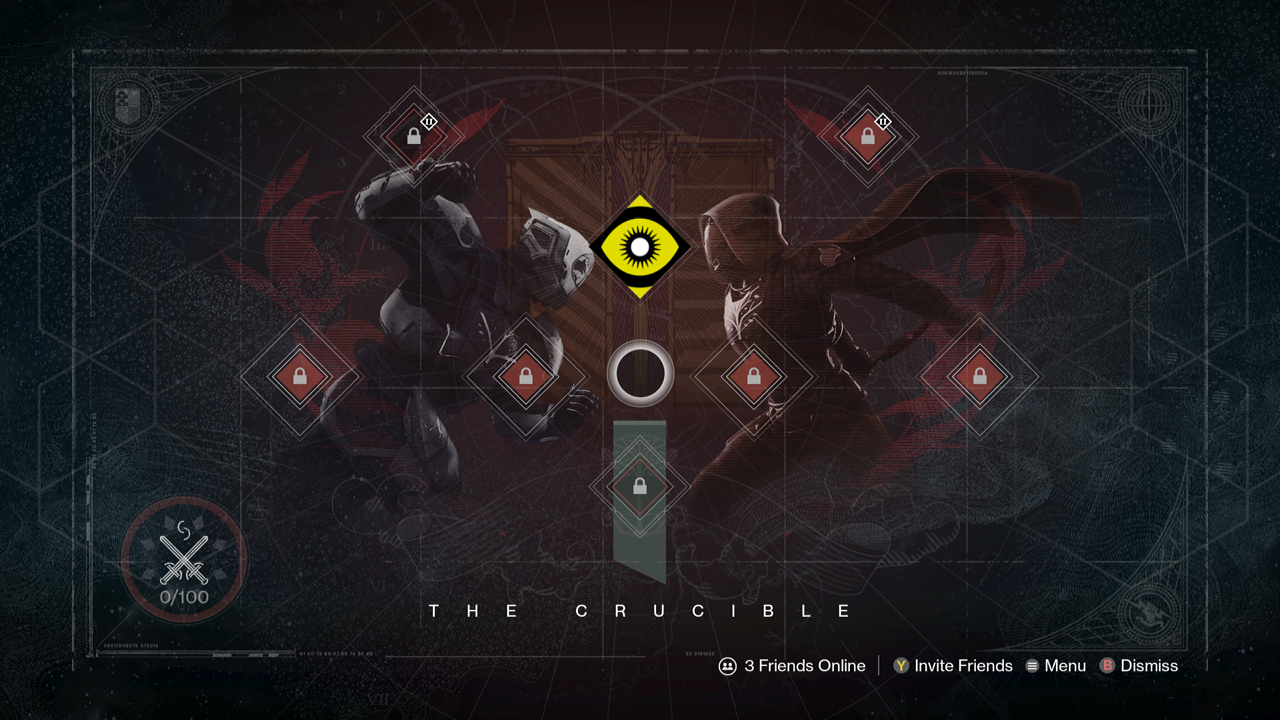 Who knows when I'll be unbanned or if I'll even purchase the next DLC of this game after being suspended for something I didn't do.

Rant over. Thanks for reading.